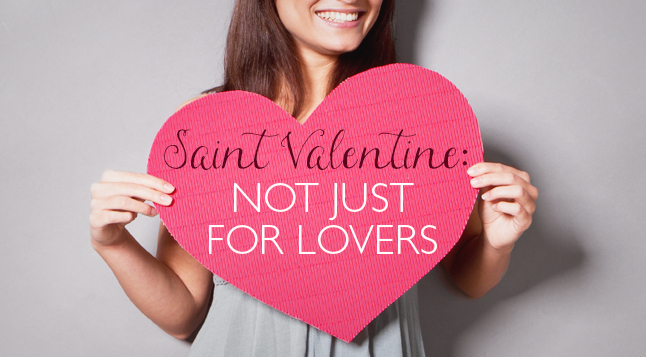 February 14 is known for hearts and roses and chocolates and love. It is also known for Saint Valentine.

It can be easy to forget that this holiday is more than just a time for couples to get dressed up and go on dates, for singles to be aware of their relationship status, and for kids to painstakingly write out cards for every. single. member. of their class. But this holiday wasn’t invented as a marketing ploy, despite the money it makes. Valentine’s Day was named after a man known for his devotion to God and the church.

Now, here’s the deal: the details on Valentine’s life are murky to say the least. There are conflicting accounts of almost everything I’m about to write. But there are also plenty of accounts that agree on the story. Just take it all with one big “Legend has it…” grain of salt.

While there are up to three different Saint Valentines reported to have existed, most people think all the stories are about one man. He probably lived sometime in Rome in the third century and worked as both a physician and a priest (or maybe just a physician or maybe just a priest. Remember, legend has it.). The story goes that at the time, it was against the law for young couples to marry because the emperor wanted the men to be constantly ready for battle. He thought having a wife at home might weaken their enthusiasm for war. Valentine went against orders and secretly provided marriage ceremonies for couples. And he was thrown in jail. While there, he befriended a jailer. The jailer had a daughter who was blind and asked Valentine for help. Valentine was able to heal the daughter’s sight, perhaps using medicine, or perhaps by miraculous means (depending on the storyteller). In most accounts, the jailer becomes a Christian because of Valentine’s actions. At some point, the story goes, Valentine sent a note to the jailer’s daughter signed, “From Your Valentine.”

Valentine was executed for his faith on February 14.

His death day was near the time of the feast of Lupercalia, a Roman festival that took place on February 15. During Lupercalia, there were various traditions and rituals to help young single women find a date and increase their chances of childbearing. I won’t go into detail because the various accounts are just confusing. But know that Lupercalia makes eHarmony® look like a walk in the park.

In Europe, people also tied February 14 to love. They believed birds found their mates around that time of year—Chaucer even mentions it in his writings.

All of this love stuff was very convenient for celebrating the Saint known for uniting people in marriage and sending sweet notes. Over the years, as the church increased in popularity, the day of Saint Valentine’s death absorbed all the love around it and eventually turned into what we now celebrate on February 14.

So, yes, the day is about love and cards and romance. But it is also about one man showing the love of Christ to others, despite hostility. He acted on his beliefs and stood up for them, even though it cost him his life. Saint Valentine was not just for lovers. He was (and is) for love.

Elizabeth Hyndman is a Content and Production Editor for LifeWay Women short term studies. Read more from Elizabeth at edhyndman.com.